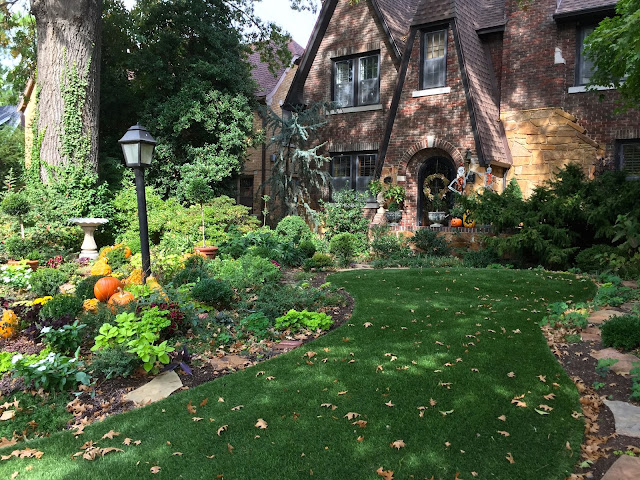 Last Friday, on 4 YOUR GARDEN (find the the segment at the end of this post or at  KFOR.com  HERE if the video does not appear on your device.) I discussed some things to consider before making the move to artificial turf. Too shady? Pets? High foot traffic? Poor drainage and/or air circulation? No irrigation or frequent water rationing? All are good reasons to consider alternatives to what we know to be the 'traditional' American lawn. In my own landscape, I had finally reached the point where converting any more turf area into beds was no longer an option. I still like the lushness of a green lawn as a backdrop for the beauty of what is planted in the beds... 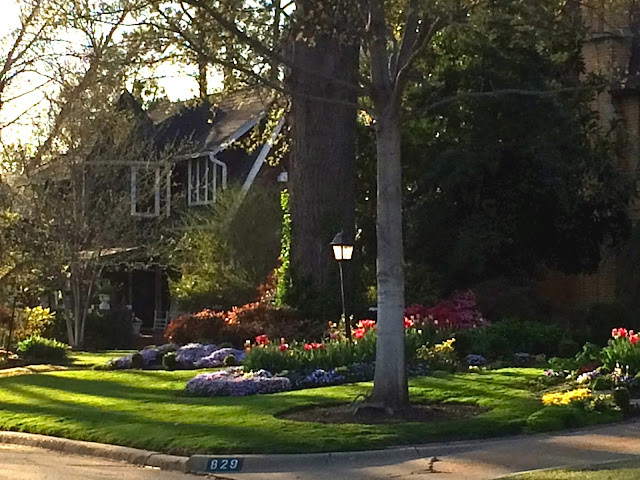 and I STRONGLY feel that GOOD LOOKING GRASS is the canvas upon which the seasonal garden color and display is drawn. Imagine the tableau above with dead, brown turf...

...AND, after 25 years of turf war, my sanity and mental health (not to mention an aching back) became an issue and a casualty of inhospitable lawn conditions as well.

So, decision made. Now for the nitty gritty of it all.

After a rather lengthy research and discovery process, I finally decided on using two companies:
NexGen Lawns, out of OKC and Tulsa, and Airfield Systems also here in OKC. The first for the turf install, the quality and realism of the turf itself, and good customer service...and the second, a company that supplies the underlying 'grid' system upon which the turf is laid. After looking at god knows how many samples, I finally decided on a grass product that looked and felt most realistic. (The variety I selected even has thatch, and subtle length and color variability to more effectively up the realism quotient).  If you are selecting a turf for mere functionality, i.e. dog run, playground, putting green, etc. this realism consideration may or may not be so important. As mine was a largely aesthetic decision, that was my driving issue. Now let's talk details.

First the process. After ordering the turf, there was a wait time of about 7+ weeks.

STEP 1: The crew (extremely professional) removed about two inches of dead turf and soil, excavating enough so the grade would be at the same level as before. 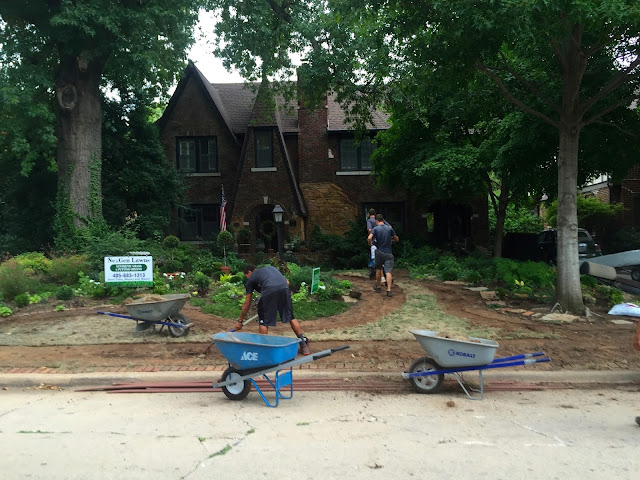 Back-breaking labor, I might add, and where most of the total cost of the installed square footage price lies, not in the turf itself. 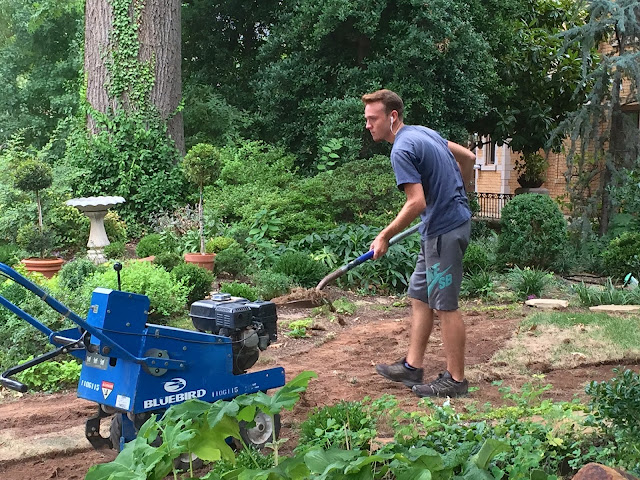 Note the pitiful condition of the turf being removed...I rest my case. 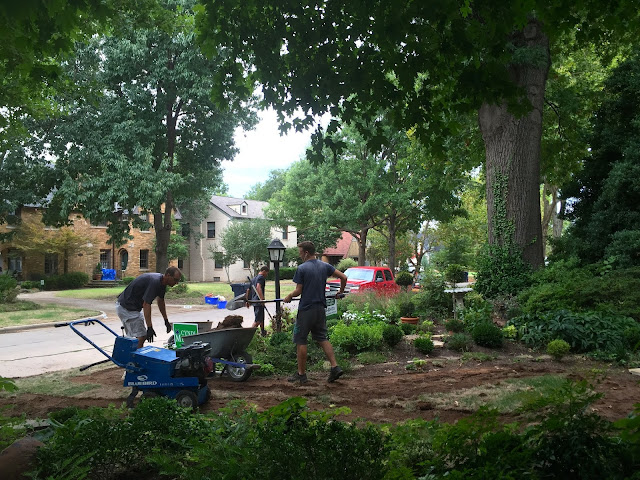 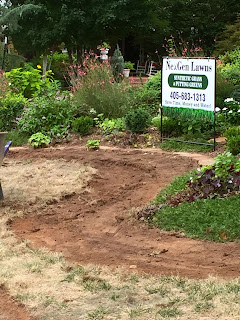 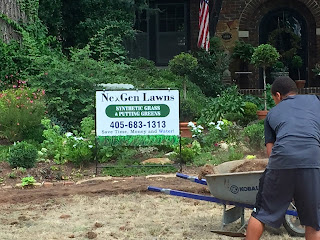 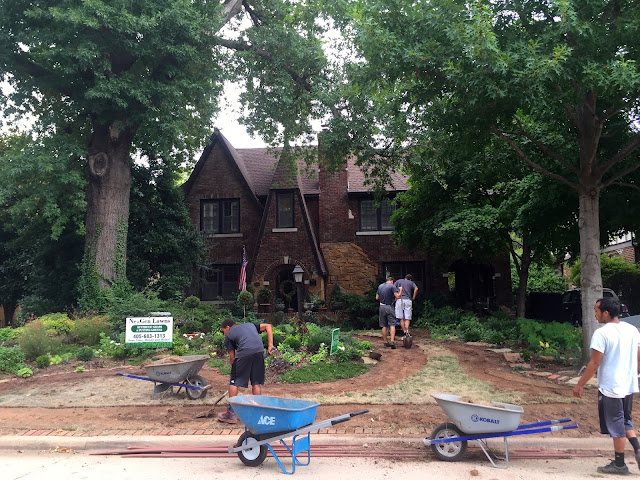 As I've said before, I have just a throw rug of a lawn, not a huge expanse. I would not have  considered using synthetic turf if this had not been the case. The cost, the setting, the benefits of live turf...all would be issues in my mind that would make using artificial turf unrealistic, impractical, and a non-starter. 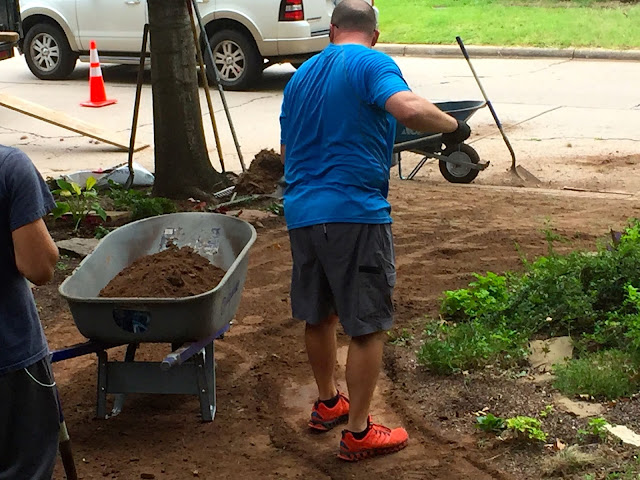 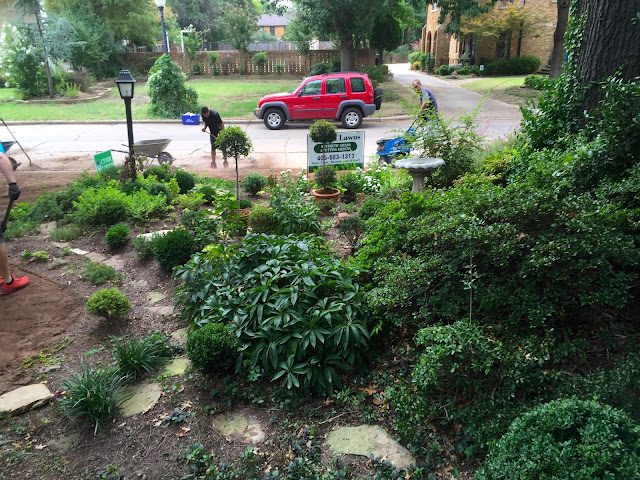 After the turf was removed, the original bed lines and grass delineation are still very evident, making
the re-establishmed of the grassy areas easy to determine.

STEP 2:  Flexible edging put in place to determine bedlines (where the original bedlines were before grass removal). 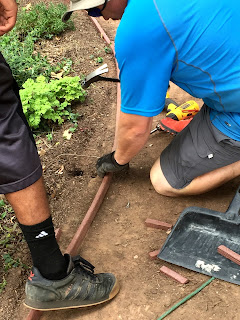 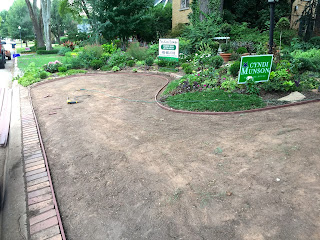 I was quite involved in this....having them move it an inch here, an inch there....going inside to look at the curves below, to insure the curves and parabolas were just so... 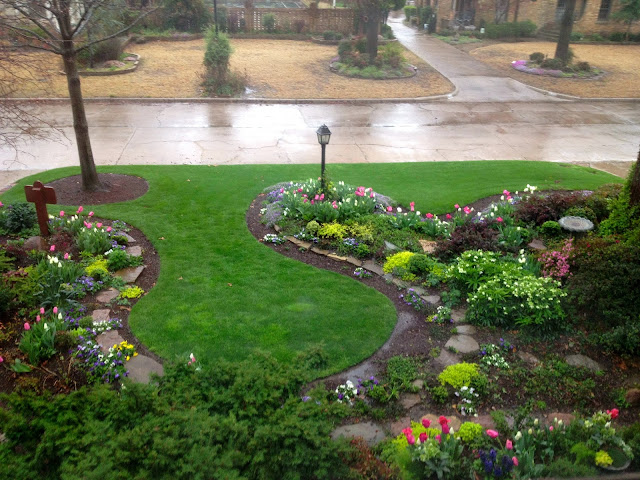 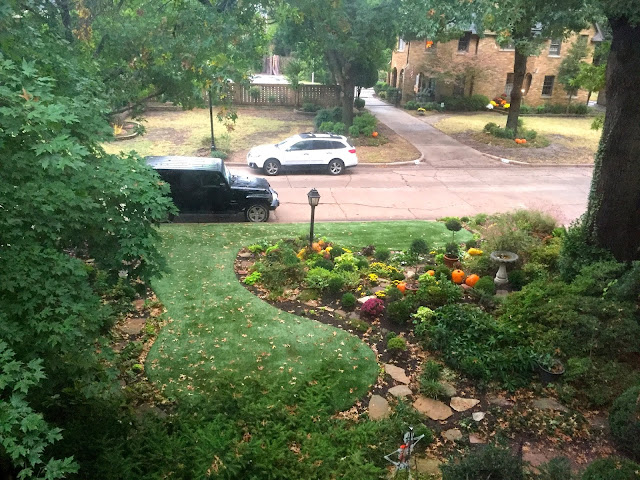 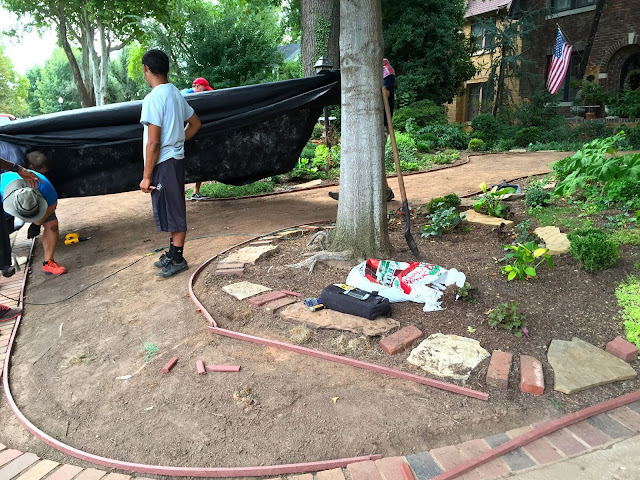 After the edging was in place and secured, 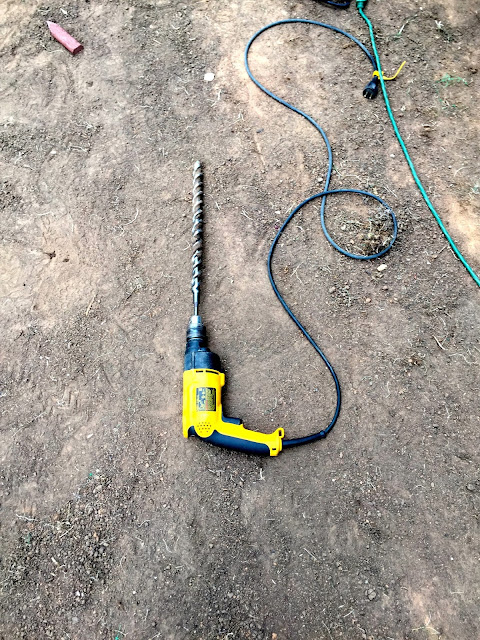 a layer of weed barrier was put down, cut to size, and also secured in place.

At this point, I made another decision based on two concerns I had:

(b) I not only wanted it to LOOK real, I wanted it to FEEL real when walked or laid upon...with the same degree of buoyancy and give.

Consequently, I decided NOT to put down a crushed gravel base (a somewhat less expensive option), that would have felt more like hardscape and also would have been harder on the legs and back of this gardener who spends hours working outside walking on the turf areas. 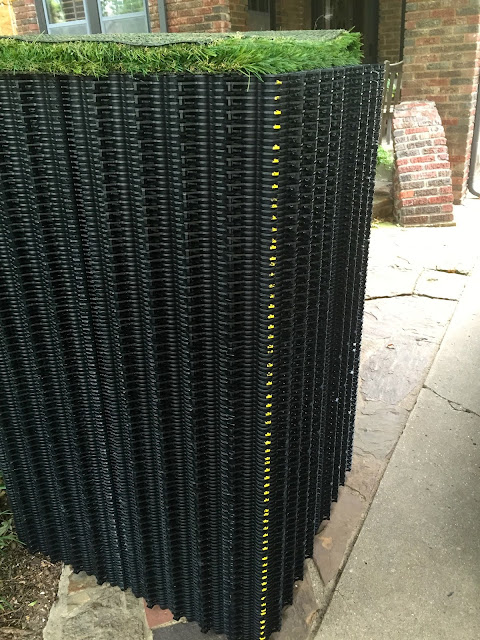 If a new owner wants to remove the synthetic turf and put down real turf, all they will need to do is 'peel' away the fake grass, and put real turf (now with EXCELLENT drainage) on top of the Airfield Systems grid. (If you go to their site here you will see they used my install as a case study.) 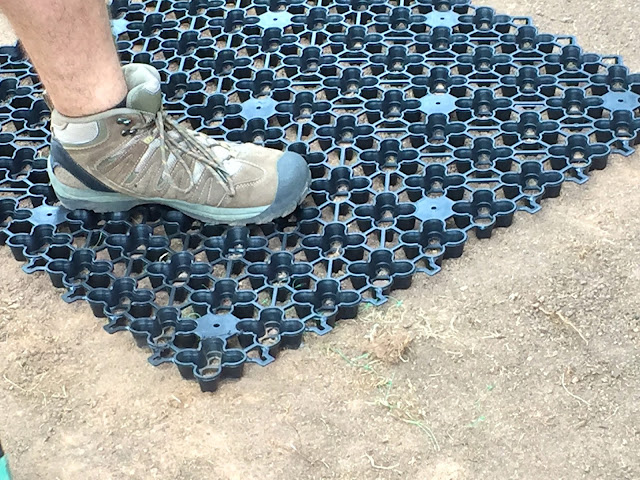 The grid is cut to size, another layer of weed barrier is placed and cut to conform, then the turf
is laid, not unlike carpeting, on top of the grid and also cut to conform. In fact, a carpet stretcher is used to tighten up the turf and insure a good lie. Special tools  are then used to create exactly the same crisp, well defined edge that I had before, and a feature of my gardens that is somewhat of a trademark for me. Both images below are of the new turf edging. Note how my seasonal color can now spill over the edge without shading out and killing the turf underneath. 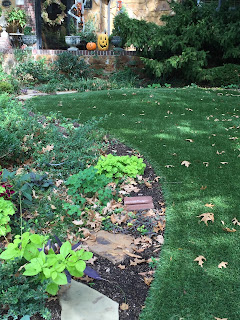 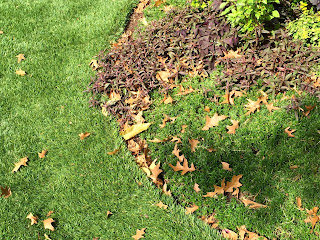 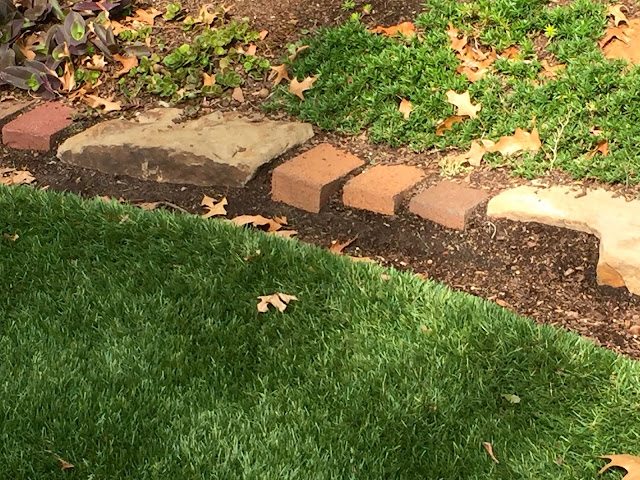 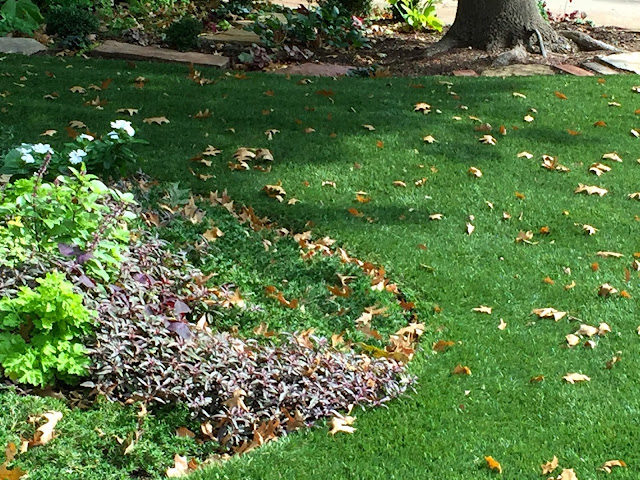 even along the brick border near the street... 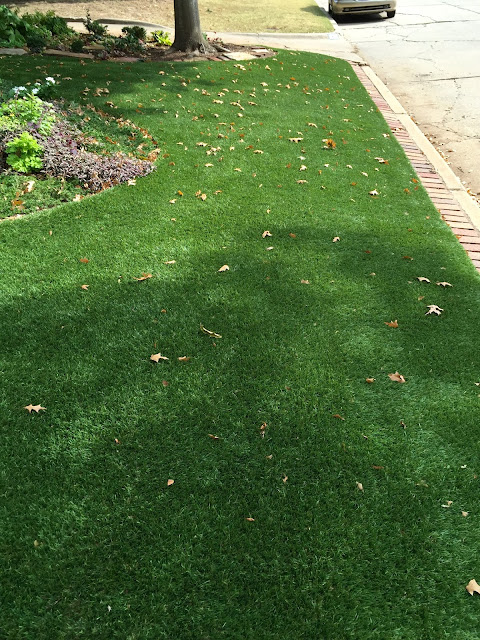 At this point it all looked great, but it was the last step that really upped the reality quotient and put it over the top for me. Fine cut sand (excellent for future drainage and NOT a rubberized infill) is then power-brushed over the entire lawn. This provides weight to hold it in place, added 'give' underfoot and just perfectly 'abrades' the surface to take away sheen and intensity of color rendering it so realistic you'd barely know it wasn't real if I didn't tell you. EVEN AFTER TOUCHING IT, STANDING ON IT, EXAMINING CLOSELY.  Foot impressions, just like organic turf, are made when you walk on it, and bounce back over time. 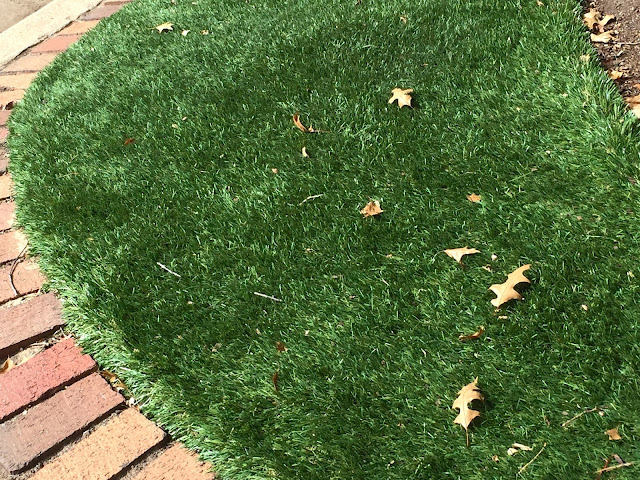 In fact, I had a garden tour yesterday. 40+ visitors. Those unaware the grass was not real didn't know it was fake until I told them. They said they just thought I had beautiful grass.  :) 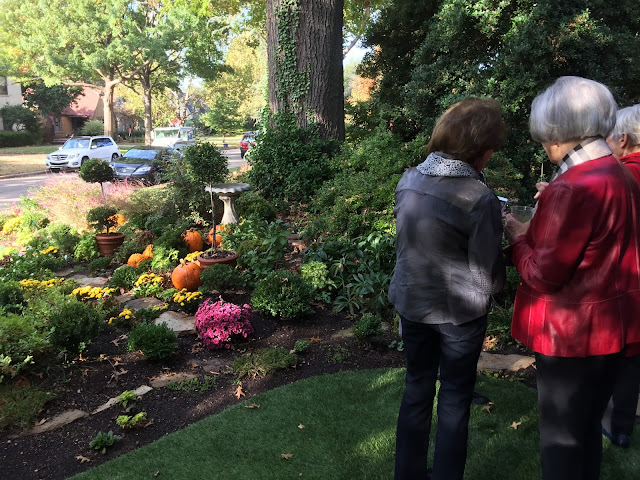 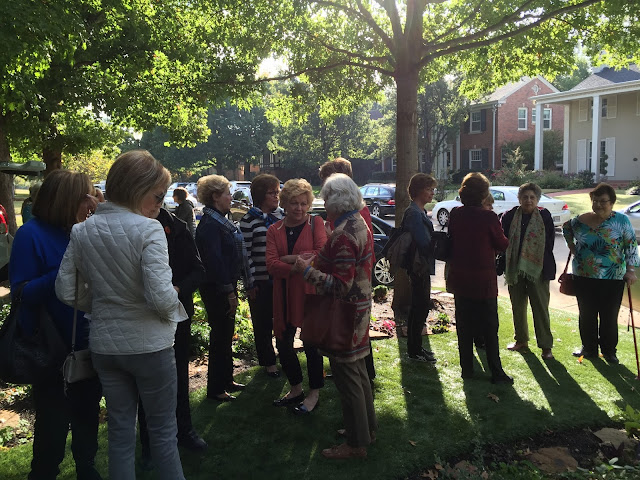 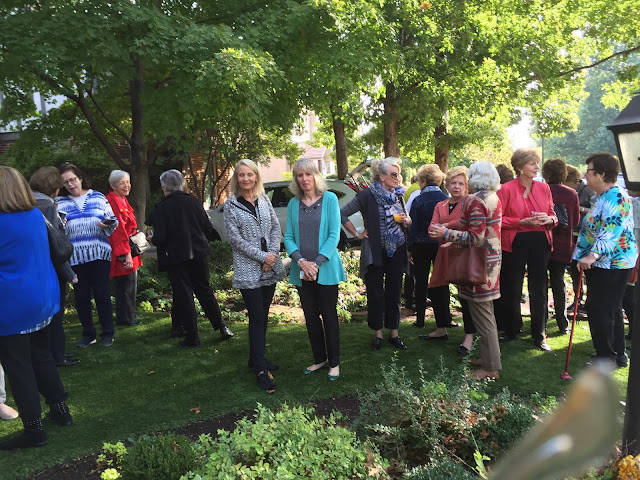 * It has a 2% fade rate over 10 years. It comes with an 8 year limited warranty, and the average
life span is 20 years. If a section of the turf needs to be replaced, it will be easy... as the initial cost
and labor of the prep work has already taken place. My selection is made in the USA and is recyclable.

*It took two days to install.  Two days to a perfect lawn. No more soil erosion or mud after a rain.
The extra drainage will improve my yard's ability to absorb moisture and rain...not run off of hard-pan dirt or grass into the street and down the sewer.

* The turf alone is approximately $2-6 /sq ft.  Installed it is $10+, depending on the quality of
turf and underlying material (grid or gravel).  Estimated time to recover the cost: 3-5 years. It is not inexpensive by any means, BUT I DEFINITELY THINK IT IS THE FUTURE, and could NOT BE MORE PLEASED WITH THE RESULT. WELL WORTH THE INVESTMENT.

* Debris, acorns, leaves, etc. is very easily just blown off. While it will get hotter than real grass (no water to evaporate for cooling), mine is in the shade so it won't be a problem. Will be no hotter than hardscaping, and can easily be cooled down with a spritz from the hose.)

* I will NEVER AGAIN have to mow, BUY a new mower, edge, fertilize, apply fungicide or insecticide, top dress, battle squirrel divots, shoo away seed-eating birds, water, worry about wet leaves suffocating my germinating fescue, replace lawn after a large group of visitors come through, worry about brown spots made by peeing dogs or cats, worry about those allergic or sensitive to bermuda, worry about the sprinkler working while I am on vacation, feel guilty about heavy water consumption or turf health during a summer of 100+ degree temps, dispose of mower engine oil, NOT mow on ozone alert days, dread the process of scalping and overseeding each fall, or

be heartbroken as my beautiful landscape begins to deteriorate as the grass starts to die EVERY SUMMER! 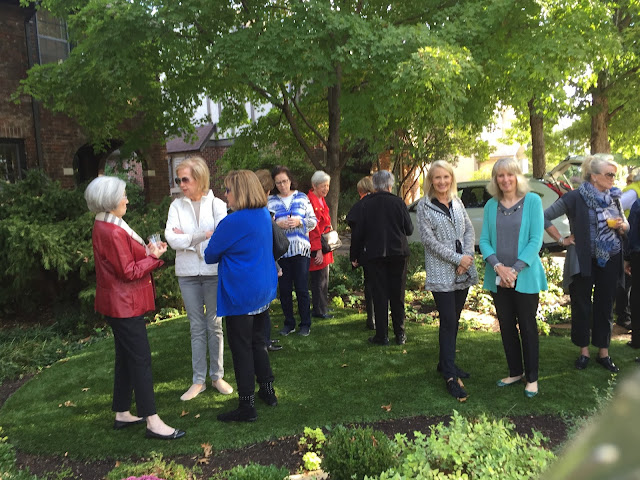 And finally, some OF MY OWN SPECIAL TIPS THAT I THINK MAKE IT LOOK REAL:

* Leave in berming and subtle topographical changes. This creates shadows, mimics exactly how
it looked with real grass, and enhances the color variance. Most artificial turf is unnaturally flat I think.  This may be easier to install, but doesn't look nearly as sophisticated and authentic.

* Get the edging right!  Details matter. Take time to figure it out.

* Let ornamentals and seasonal color spill over the edges onto the grass. Blur the lines.  The more beds and plantings you have to surround the turf will help enhance its beauty, reduce its cost, and remind people you are a REAL gardener, concerned about the environment, care about curb appeal and the affect your home and landscape have on your neighbors and neighborhood.

So, there you have it. I have included as much detail as possible, because it's important, and hopefully, helpful to you. This was a decision long in the making; a blog post long in the writing. Taking this plunge was risky for me financially and professionally, but turned out better than I could have imagined, and yes, I plan to do the back as soon as possible.  More and more designers and home-owners across the country are coming around to its practicality, beauty and eco-friendliness.  I want to spend more of my time working in and enjoying the garden I have created, not battling its turf.

I do think I have made many converts (including myself.)  Like anything in the garden, if not done well or appropriately executed, it can look ugly or tacky. A Landscape Architect friend of mine told me that I should go ahead and just DO it already (after so much deliberation)...so as to give others 'permission' to do so as well. If that is so, I hope I have.

Please let me know your thoughts by commenting. I and many others will be curious as to your feelings on the matter. 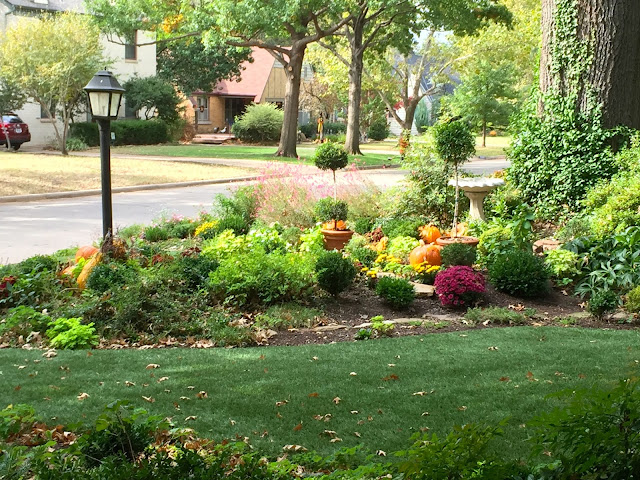