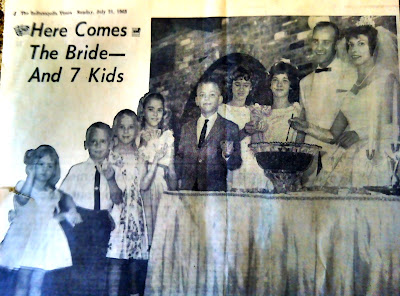 Forty-nine years ago this last July 20, my second mother married my father. By extension she also 'married' my father's seven children, aged one to twelve.  I was five at the time; third from the left (in the flowery dress, of course.)


My first mother, at the tragically young age of 36,  had died a mere fifteen months before, and to say that the earth shifted on its axis would be an understatement.  No Brady Bunch scenario here...shell-shocked kids making a transition from mother to mother...a new brides' s transition from being a single professional to a mother of seven (shortly to be nine, then ten)... 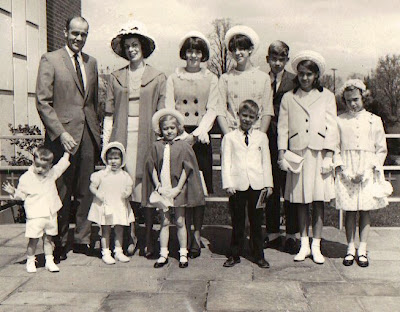 and wife to a grieving widower, out of town for work more often than not.


Lack of understanding, of comprehension, of empathy...in both a cosmic and personal sense...was exhibited all-round...no matter the age, sex, vulnerability, lack of experience, or degree of PTSD of each individual in the family.


Still, we all survived... and, somehow, later, as adults, thrived.


A mere four months after the wedding (on November 22, 1963 to be exact -- does this sad date ring a bell?), my father picked up his brood and his new wife and moved from Indianapolis to Knoxville, Tennessee...where within a year, a set of twins was born.


By this time, we had surely shot the top off of every stress index barometer out there..


Most of this time is understandably fuzzy for me.  No doubt for both emotional and developmental reasons. But one specific memory does stand out.


At about the same time we got a new mother, a huge white porcelain pitcher with matching white basin appeared.  It lived on the hearth of the brick fireplace, and was FILLED to overflowing with


a HUGE bouquet of different types and colors of plastic, long-stemmed flowers.


It may seem like an exaggeration, but I don't remember having ever seen such color.  I loved it, and in my sometime gray new world, it brightened up my young life.  Those were IMPORTANT flowers... an IMPORTANT memory.


Despite my affection for this plastic bouquet, I now, as a long-time flower garden enthusiast,


But to everything there is an exception---and here is mine...and a great little tip.


I love orchids, especially white ones.  And even though orchids are prized for their long lasting blooms, the foliage is far more long lived, and given time and much TLC will flower again. 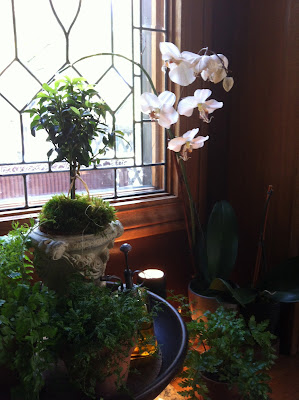 But here's the thing.


I DON'T WANT TO WAIT or even provide all the TLC...being lazy and quite impatient in this regard.


So this floral purist, cheats.  Yes, cheats.  After the orchid has dropped its last petal, but while the foliage and plant itself are still as fresh looking as ever, I cut off the dead flower stalk and 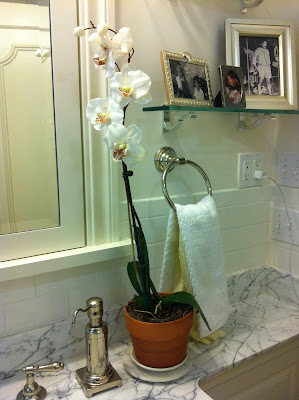 insert a fake blossom in its place.  And without serious sensory investigation, I defy you to tell the difference.

Here's a test.  Ignoring the poor photo quality (please), try to tell the difference between these two orchids.  Which has the real flower, and which has the fake one? (I'll tell you tomorrow which is which.) 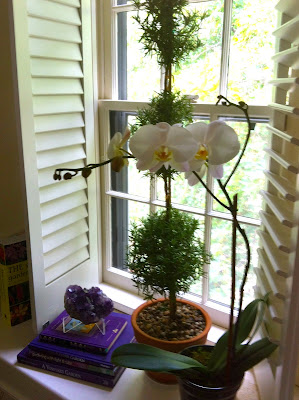 First, in full view; then a close-up.  Let's call this 'Orchid 1' for future reference. 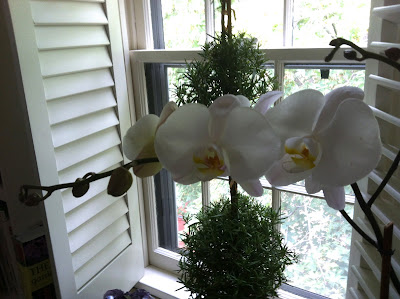 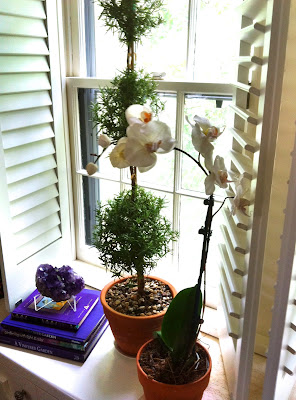 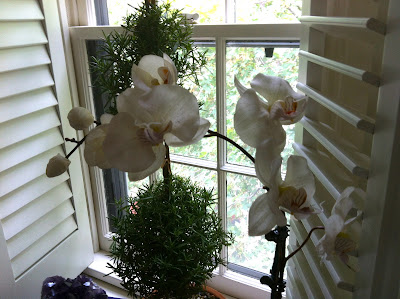 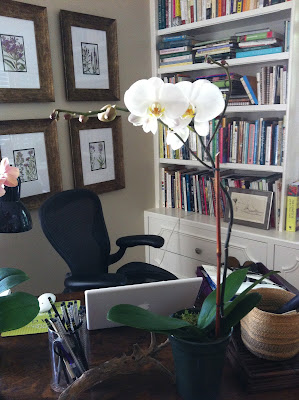 Tomorrow, the answer and some tips on choosing your faux flower.


Aren't we sneaky, though?


And who ever said flowers aren't important...