The Worst Hard Time....Then and Now 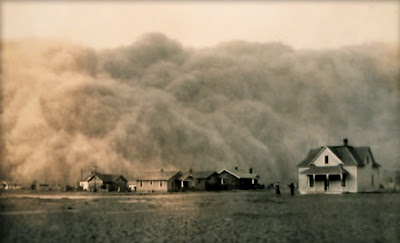 
"A Sunday in mid-April 1935 dawned quiet, windless, and bright.  In the afternoon, the sky went purple--as if it were sick--and the temperature plunged.  People looked northwest and saw a ragged-topped formation on the move, covering the horizon.  The air crackled with electricity.....As the black wall approached, car radios clicked off, overwhelmed by the static...Waves of sand, like ocean water rising over a ship's prow, swept over roads...
That was Black Sunday, April 14, 1935, day of the worst duster of them all.  The storm carried twice as much dirt as was dug out of the earth to create the Panama Canal.  The canal took seven years to dig; the storm lasted a single afternoon.  More than 300,000 tons of Great Plains topsoil was airborne that day...


...On May 11, the orphaned land of the Great Plains came to the doorstep of the nation's premier city.  For five hours, the cloud dumped dirt over New York.  The outline of the Statue of Liberty was barely visible, and it wore a coat of light gray topsoil.  The storm moved out to sea, covering ships that were more than two hundred miles from shore.
American meteorologists rated it the Dust Bowl the number one weather event of the twentieth century.  At its peak, the Dust Bowl covered 100 million acres...And as they go over the scars of the land, historians say it was the nation's worst prolonged environmental disaster."
Excerpts from The Worst Hard Time by Timothy Egan
Image courtesy of NOAA George E. Marsh Album 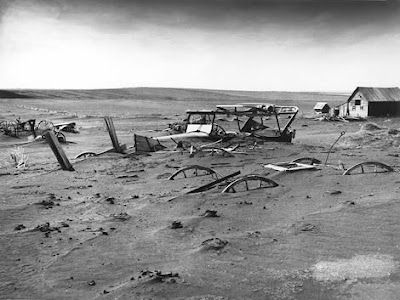 Image courtesy of the United States Department of Agriculture

And it is on this land, on this prairie, in the state of Oklahoma, that I try to garden.
I say this with utmost humility.  I bow in deference (and insanity) to unrelenting winds that on Sunday, via 45 mph wind gusts, blew from the southwest and produced a high in Oklahoma City of 91 degrees.  Not to be outdone, on Tuesday, the northern winds met these 45 mph gusts gale for gale, but lowered the temperature to 58 degrees, with a freeze that night.  Disturbing and unpleasant, but not as dramatic as the 103 degrees registered in a southern OK town on Monday, whilst it was 29 degrees on that same day up in the Panhandle, or the 100+ degree temperature swing in a week's time this past winter in one northern Oklahoma community.
And did I mention that we are in a record drought?  March registered the second lowest level of precipitation in Oklahoma City on record, and honestly, I can't remember when it rained last.
"Thank god", a friend commented to me recently, "we can water." But I reminded her that unless it rains soon, that too will end. Water rationing will begin, the heat will escalate feeding upon the parched earth, and then the seemingly endless string of 100+ degree days will begin.
(If at this point, as a fellow OK resident and gardener, you are compelled to either slit your wrists, or at the very least, turn in your trowel,  then  QUICK!  go back to the post with the lovely images of the tulips and columbine...)
This book, The Worst Hard Time by Timothy Egan, should be on the must read list for anyone and everyone who aspires to garden, or even reside, in this often harsh prairie country.  Believe it or not, during horrific weather conditions like the ones we are experiencing now (or like the record cold temperatures of this past winter...or the record heat and biblical hail of last summer...or the ice storms of the winter before that...), I go to this book for comfort.
Yes, comfort.
While it does nothing to assuage my angst over my garden, it does help me
not take it quite so personally.
Because when the wind and the heat and the dust begin to make me go demonstrably insane (Husband will testify to this...), I feel very singularly and personally and miserably and irrationally
picked on.
As does my garden. This makes no sense of course; think of the poor farmers and ranchers, and well, everyone, who resides here. And that is the point, I guess, of going to the book for comfort.
It reminds that I am not alone in the often thankless task of communing with this prairie land.  I'm just one of the many who have tried, and continue to try, to create a kind of earthly beauty that can resonate here.  For me specifically, a kind of garden beauty that can speak to me in the stylistic   accent, or in this case, twang, of my urban Tudor home, but in the rugged language of the prairie.   Oh, and in a responsible way.  And let me tell you, it ain't easy, folks.
But then, the book tells me, it never has been.
And never will be.
So, once again, I am faced with another (to me anyway) disappointing gardening season.   Not as fresh, as lush, as productive, as satisfying....as  perfect, or as glorious as years past.
But, still, beautiful, even in its diminished, wind weary, state.
Consequently, I am vowing this year, to look at and appreciate very deeply and with great awe and humility each small, lovely component, struggling to be beautiful in the symphony of a larger landscape.  And if the symphony doesn't perform,
Then I will look closely, very closely, at each individual note. 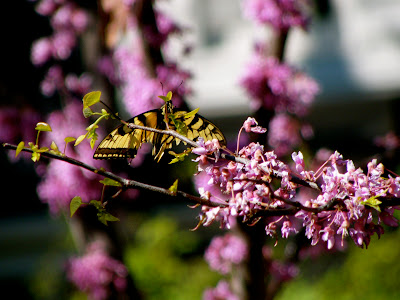 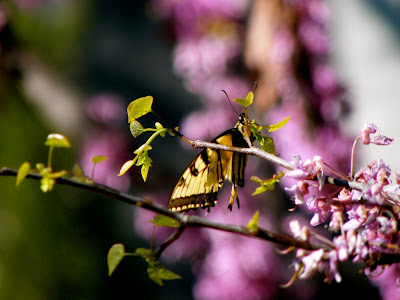